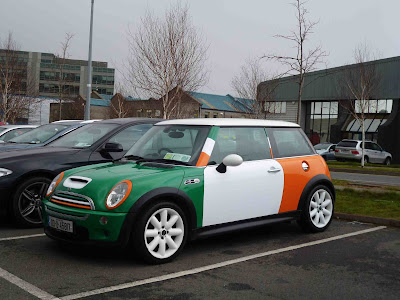 These British small cars have been built at the Mini Plant in Oxford. To kick off the celebrations, five Oxford-built Minis are on a tour that has taken them to eight former classic Mini production locations the length and breath of Europe.

The Mini convoy yesterday arrived at the classic Mini assembly site at Portobello Dublin. The only remains of the plant today are the entrance and exit gates located on the Lower Rathmines Road in Dublin 6 (pictured left).

The tour finishes this Thursday March 28 at the Mini Oxford Plant.

When the Mini was launched in 1959, it was an overnight sales success in Ireland. But before the car could be sold in the Republic of Ireland, all the component parts had to be packed in wooden crates in the UK, shipped to the Port of Dublin, and then assembled in two separate plants in the Dublin area.

The Brittain Group assembled the Mini at Portobello and there was also a service facility in Ringsend, close to the current Aviva Stadium.

The Brittain Group and rivals Lincoln and Nolan Ltd - who also assembled the Mini at New Wapping Street in East Wall - amalgamated in 1967/68 and became the B.L.N. Motor Company, moving to the Naas Road on the South side of Dublin. The company was then bought by the Smith Group who assembled Renaults in Wexford. Following the B.L.N. merger, the Mini assembly franchise went to Reg Armstrong Motors in Ringsend.