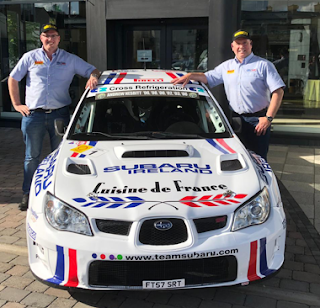 Déjà vu Donegal was a resounding success for participants and spectators alike when the sun shone on a record number of glistening entries on Saturday, 31 August and thousands of euros were raised for the Donegal Hospice.

James McDaid and Sean Doherty, Patrons of the Donegal Hospice brandished the county flag along with Jack Beatty, the seven year old “Little Blue Heroe” in his Garda uniform, who  suffers from brittle bone disease, to start the million pound parade on a 120 mile journey.

Their progress north over the Letterleague Stage was uneventful apart from the breath taking views of Muckish mountain but flooding as they entered the Glen Stage required their experienced navigators to find an alternative route. In the village there was gridlock as the crowds engulfed the rally legends in front of Mary of Glen’s famous pub.

When the cameras stopped clicking Andrew Nesbitt’s S11 WRC Subaru, (which had been especially wrapped in its old Cuisine de France colours for the occasion), Cathal Curley, John Lyons, and James Cullen all in Mk II Escorts, moved on to complete the stage.

At the Singing Pub on Atlantic Drive it was more of the same as Vincent Boner (Manta 400), Austin MacHale (BMW M3), Brian Nelson (Escort MkII) and more mingled amongst the crowd before their early afternoon drive over the tortuous test that led them back to Downings.

The most poignant moment of the tour was on the Fanad Stage when Andrew Nesbitt stopped at the point where Manus Kelly had lost his life on the June International Rally, to lay a Déjâ Vu Donegal wreath in the company of his fellow drivers and co-drivers.

The spectators jockeyed for vantage points at the hairpins on the famous Knockalla climb with the background of Lough Swilly looking its magnificent best but the undoubted highlight was the visit to Ramelton where the town’s Festival Committee had laid on a magnificent reception. The banter with the top drivers over the PA was not to be missed and then it was back into the cars to drive the famous town stage. This was Déjà vu  in every meaning of the words with the streets decorated with vintage banners helping us to be transported back into the 1980s and the thousands lining the route loved every moment of their time travel back into yesterday.

The memorable day was rounded off with an evening of spectacular videos, interviews, songs and dance and an auction hilariously conducted by the six-time winner, Andrew Nesbitt, which raised thousands for the Hospice.

And the co-drivers and the rally creator were not forgotten as Dr Beatty Crawford and Cathal Curley made special presentations to Letterkenny’s Rory Kennedy, commemorating forty years of success in the hot seat and Austin Frazer the first Clerk of the Course, often described as the ‘Architect’ of the Donegal International Rally.

“The burning question of course is how much has the event raised for our chosen charity, the Donegal Hospice? That will not become evident until all the donations have been received and all the bills paid but we will be very disappointed if it is not well in excess of €15,000.” said Dr Beatty Crawford and Alan (Plum) Tyndall, the event organisers.

Andrew Nesbitt and his son Graham, pictured above aboard the WRC Subaru, led a 165 strong cavalcade of Historic and Classic cars through the famous Donegal special stages in aid of the Donegal Hospice.