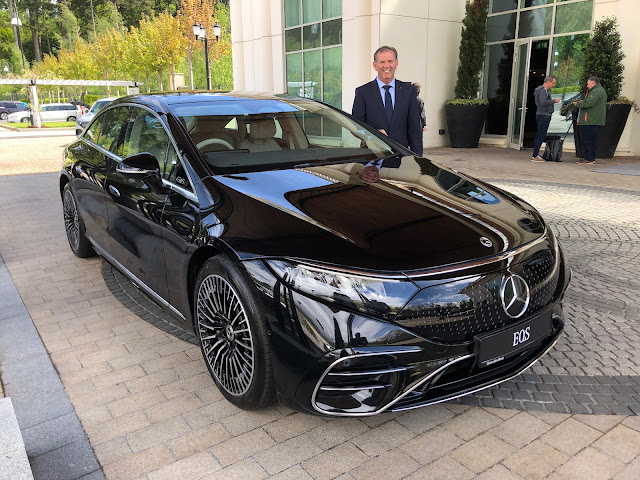 Mercedes-Benz has introduced two important new models to Ireland, the large luxury EQS and smaller EQE, writes Trish Whelan.
With the brand’s EQA, EQB, EQC, and EQV people carrier, their arrivals increase to six the number of electric-powered passenger vehicles sold in Ireland while taking yet another major step towards their goal of having a fully carbon-neutral fleet inside the next 20 years.
Genetically modelled on the recently launched S-Class saloon (but looking very different), the EQS comes in a choice of two model variants: EQS 450+ (with rear axle eATS electric motor) priced at €129,965, and an EQS Mercedes-AMG 53 4MATIC+all-wheel-drive version (motors on both axles) at €180,015. It has an operating range of up to 735kms (WLTP), power output of up to 333bhp and a top speed limited to 210km/h. Electrical consumption is 18.9-16.2kWh/100km.
Mercedes-Benz Ireland sales manager Ciaran Allen (pictured above with the new EQS) describes the new EQS as ‘the embodiment of everything the brand represents in terms of luxury, comfort, safety and specifications’ and ‘a mould breaker many of whose features will be seen in future EQ models’.
The car embodies over 40 new inventions and 20 new design applications to create what the brand says is ‘a car that appeals to almost all of the senses’.
Inside, a key feature is the optional concave dash-mounted MBUX infotainment ‘hyperscreen’ whose curved and flexed surface appears to float across the full width of the car. Now equipped with artificial intelligence and a ‘learning’ capability, it supports the driver in numerous additional ways beyond what was possible previously.
The car we drove at launch from Powerscourt Hotel in Enniskerry, Co Wicklow, was the 450+ which has a power output of 333hp (565Nm torque) which can sprint from 0-100km/h in 6.2 seconds. The MBUX Hyper screen added another €12,218 to the price but looked absolutely stunning. The premium plus package was another €17,776. 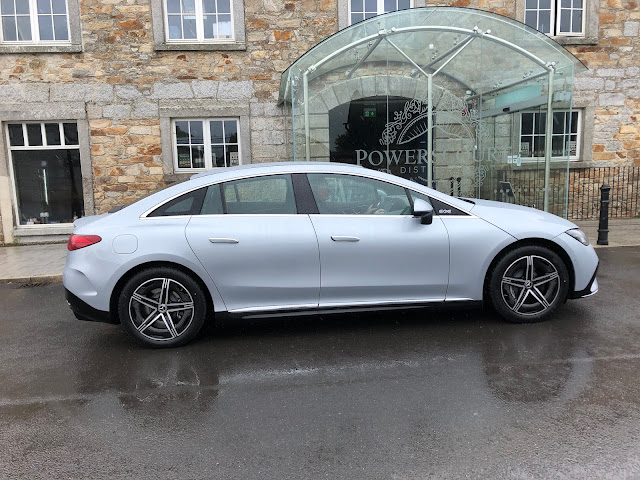 The new EQE, the all-electric version of the Mercedes-Benz E-Class series, will appeal to current E-Class owners. It has a range of up to 654km. Here in Ireland the focus will be on the EQE 350+ version priced at €85,980.
This was the car we drove briefly at launch with the AMG Line. It comes with a 292hp electric motor and 565Nm torque and can do the 0-100km/h sprint in 6.4 seconds. Annual road tax is €120. Optional extras included AMG Line interior and exterior pack, a premium package, and red seat belts which combined took the total price of the car to €105,131.
Another model at launch is the AMG EQE 43 priced at €120,180. Coming later will be an EQE 500 and AMG EQE 53 both equipped with 4MATIC AWD and eATS at front and rear axles. Slightly shorter than the EQS in terms of overall length, EQE is comparable to the CLS in terms of its outer dimensions and visual appeal. Inside the cabin has plenty of space for passengers with generous front shoulder room, a longer interior and a higher seating position. Boot capacity is 430 litres.
Ciaran Allen for Mercedes-Benz Ireland said at the launch “We are confident EQE will be another electric powered winner as motorists convert to more eco-friendly motoring in ever increasing numbers.”