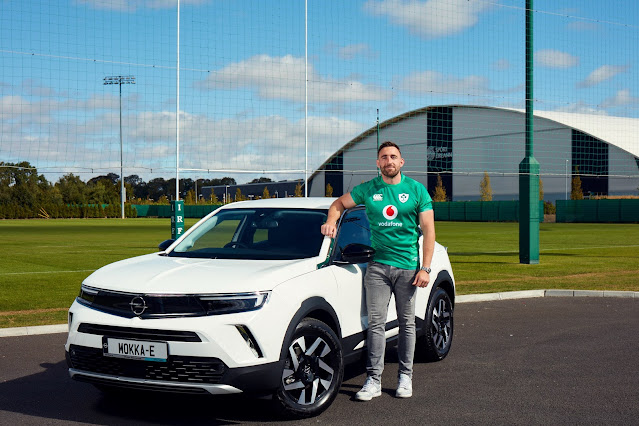 Irish rugby star, Jack Conan, has been appointed a Windsor Opel Brand Ambassador, writes Trish Whelan.
He has been presented with a new Opel Mokka-e.
Opel is a sponsor of Irish Rugby and the official car partner to the IRFU. Jack has been a powerful force in the Leinster and Ireland back row since 2014. Since making his Leinster debut that year, he has made over 100 appearances for the province, winning four PRO14 titles and a European Champions Cup.
The Bray native also toured with the British and Irish Lions for the first time in South Africa last year. He has played 30 test matches for Ireland and was part of the winning Six Nations and Grand Slam team in 2018. He was also on the Ireland team that made history earlier this year by beating the All Blacks in New Zealand for the first time.
Jack says the Mokka-e (Continental Irish Small SUV of the Year 2022) is more than spacious for a guy his size with plenty of room for all his training kit and even for his dog Riley.
Mokka-e can do around 320kms on a single charge.
Peter Nicholson, Managing Director at Windsor Motor Group looks forward to working with Jack to promote the Windsor Deansgrange Opel and Windsor Liffey Valley Opel dealerships.