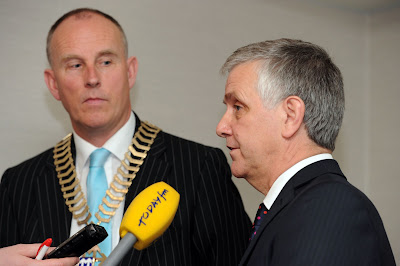 The Society of the Irish Motor Industry (SIMI) has today launched its 2012 Budget Submission in Dublin.

Central to its proposals was a change to the current registration plate. SIMI President Gerry Caffrey (pictured with Alan Nolan of SIMI) outlined how our current registration plate causes serious problems in relation to the seasonality of car sales. "Nearly 50 percent of new cars are sold in the first quarter of the year, which puts huge pressure on resources, from staff to cash flow. For those working in the industry, it's impossible to know if they will still be employed aug the end of the year."

SIMI are proposing two changes to the current registration plate which can solve this problem and also generate significant revenue.

The SIMI is seeking the addition of a special 'identifier' such as an extra character on the reg plate for all vehicles registered after 1st July in 2012 to create a second new car sales peak. This could generate an extra €20 million in VAT and VRT each year and potentially much more in the first year of its introduction.

The second proposed change to the reg plate is to allow a consumer or motor retailer to get a used vehicle's registration plate re-designated to the county of residence of its new owner. Based on a charge of €250 for this re-designation, it could deliver an additional €20 million for the Exchequer in year one alone.

In addition, the SIMI doesn't want to see any changes to the current VRT Band structure or any increase in the % rates. SIMI wants to see no major change to the Road Tax Band Structure that would destabilise the market.

The SIMI's proposals come on the back of the announcement of the October sales results which show new car sales in october were down 52 percent on October last year.