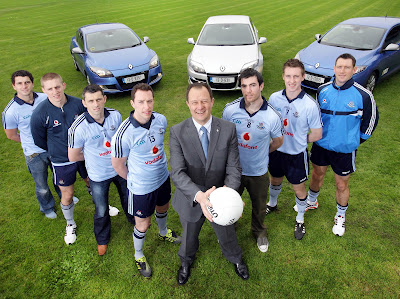 The current All-Ireland Football Champions lined out, not for a clash on the pitch, but to launch their official car partnership with Renault Ireland.

Renault will partner the team for 2012 and a number of players will drive new Renault models.

Eric Basset, MD Renault Ireland (pictured with team members) said the Renault dealership network has always had a long and successful involvement with their local GAA teams, so it seems like a natural progression for the company to build on these strong roots and work with the county teams.

Both the Dublin football and hurling teams will be supplied with new Renault Trafic vans to help with training and transporting gear for their busy season ahead.