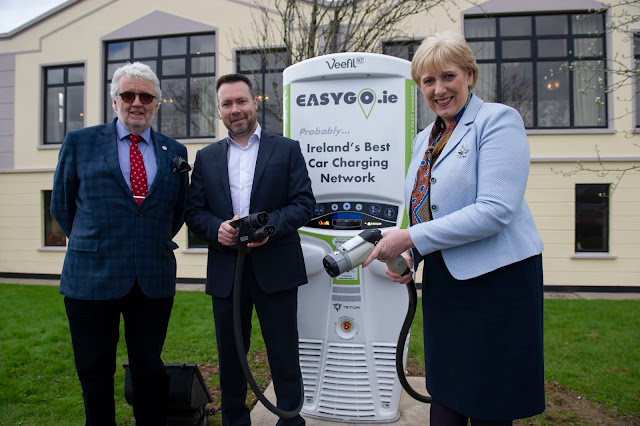 EasyGo.ie has unveiled Ireland’s most advanced, publicly-available DC charger at the Four Seasons Hotel in Monaghan that can add 50kms of range to an electric vehicle in just 10 minutes, writes Trish Whelan.

The company has deployed a Veefil-RT 50k DC rapid charger from world-leading DC charging technology specialist, Tritium. This is the first deployment of a rapid charger in Ireland on a new site in some time, and the first deployment of a 50kW DC public charger on a private network in Ireland. The charger is the most advanced of its kind with the smallest physical footprint in the world.

EasyGo.ie was founded in 2018 by Chris Kelly and Gerry Cash. The company also has plans to install 88 of Tritium’s DC rapid charges by the end of 2020 with at least 20 to be installed by the end of this year, leading to the creation of up to 50 new jobs in operations and customer support. Tritium has installed chargers in over 29 countries.

Sales of new EVs in Ireland have increased by 541 pc (from a low base).

Frank McKenna, Director, Four Seasons Hotel Monaghan said they worked with EasyGo.ie to install the charger at their site because they want to cater to EV owners who will need to charge their vehicles quickly, and in comfort as while their car charges, the driver can avail of all the facilities that the hotel has to offer.

The ceremony was attended by Minister for Business, Enterprise and Innovation, Heather Humphreys TD.